Check out costumes from the movie Galaxy Quest to get costume ideas for your next Halloween or costume party. 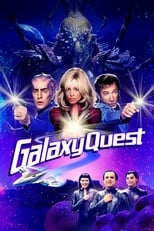 For four years, the courageous crew of the NSEA protector - "Commander Peter Quincy Taggart" (Tim Allen), "Lt. Tawny Madison (Sigourney Weaver) and "Dr.Lazarus" (Alan Rickman) - set off on a thrilling and often dangerous mission in space...and then their series was cancelled! Now, twenty years later, aliens under attack have mistaken the Galaxy Quest television transmissions for "historical documents" and beam up the crew of has-been actors to save the universe. With no script, no director and no clue, the actors must turn in the performances of their lives.

2,068 people shared this. Be the first of your friends.

Rogue One: A Star Wars Story | Star Trek: Nemesis | Star Trek: The Motion Picture | Mars Attacks! | Alien | Star Trek IV: The Voyage Home | Shaun of the Dead | Monty Python and the Holy Grail | Naked Gun 33⅓: The Final Insult | Transformers: Dark of the Moon | The Drawn Together Movie: The Movie! | The Naked Gun: From the Files of Police Squad! | The Naked Gun 2½: The Smell of Fear | Cowboys & Aliens | Tom and Jerry: The Fast and the Furry | Serenity | Zombieland | Vampires Suck | The Empire Strikes Back | Return of the Jedi