Check out costumes from the movie E.T. the Extra-Terrestrial to get costume ideas for your next Halloween or costume party. 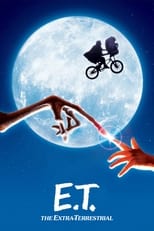 After a gentle alien becomes stranded on Earth, the being is discovered and befriended by a young boy named Elliott. Bringing the extraterrestrial into his suburban California house, Elliott introduces E.T., as the alien is dubbed, to his brother and his little sister, Gertie, and the children decide to keep its existence a secret. Soon, however, E.T. falls ill, resulting in government intervention and a dire situation for both Elliott and the alien.

2,066 people shared this. Be the first of your friends.

Indiana Jones and the Kingdom of the Crystal Skull | The Godfather | Willy Wonka & the Chocolate Factory | Batman Begins | Léon: The Professional | Predator | Scarface | The Lord of the Rings: The Fellowship of the Ring | Donnie Darko | Lost in Translation | Breakfast at Tiffany's | Predator 2 | Star Trek V: The Final Frontier | The Abyss | The Patriot | Halloween | The Bourne Ultimatum | House of 1000 Corpses | Signs | Lolita