Love, Chunibyo & Other Delusions! Take On Me Costumes

Check out costumes from the movie Love, Chunibyo & Other Delusions! Take On Me to get costume ideas for your next Halloween or costume party. 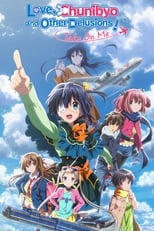 Yuuta and Rikka are in their third year of high school. One day in Spring, Touka declares that she will take Rikka to Italy with her, as her job has stabilized there and thinks they should migrate together as a family. Touka is also worried about Rikka not being competent enough to advance to universities in Japan. The gangs from the club suggested Yuuta, who doesn't want to be separated, to elope with Rikka!! A runaway drama throughout Japan begins.

6,643 people shared this. Be the first of your friends.

Fragtime | Rascal Does Not Dream of a Dreaming Girl | Violet Evergarden: Eternity and the Auto Memory Doll | Is It Wrong to Try to Pick Up Girls in a Dungeon?: Arrow of the Orion | KonoSuba: God's Blessing on this Wonderful World! Legend of Crimson | My Hero Academia: Two Heroes | Twilight | Children of the Sea | Given | Love, Be Loved, Leave, Be Left | My Hero Academia: World Heroes' Mission | Non Non Biyori: Vacation | Your Name. | No Game No Life: Zero | Attack on Titan: Chronicle | Goblin Slayer: Goblin's Crown | Weathering with You | Demon Slayer - Kimetsu no Yaiba - The Movie: Mugen Train | A Whisker Away | In This Corner of the World