Check out costumes from the movie The Trench to get costume ideas for your next Halloween or costume party. 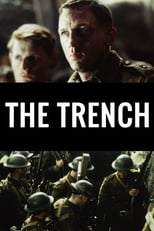 The Trench tells the story of a group of young British soldiers on the eve of the Battle of the Somme in the summer of 1916, the worst defeat in British military history. Against this ill-fated backdrop, the movie depicts the soldiers' experience as a mixture of boredom, fear, panic, and restlessness, confined to a trench on the front lines.

2,311 people shared this. Be the first of your friends.

1917 | They Shall Not Grow Old | All Quiet on the Western Front | Journey's End | Wings | Troy | Paths of Glory | Joyeux Noel | The Lost Battalion | Tolkien | Casper | Sex Drive | A Beautiful Day in the Neighborhood | A-X-L | Ella Bella Bingo | Django Unchained | The Intouchables | Scooby-Doo! The Sword and the Scoob | Friends with Benefits | Good Will Hunting