Check out costumes from the movie Gamera vs. Barugon to get costume ideas for your next Halloween or costume party. 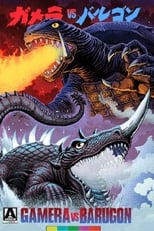 Gamera escapes from his rocket enclosure and makes his way back to Earth as a giant opal from New Guinea is brought back to Japan. The opal is discovered to have been an egg that births a new monster called Barugon. The creature attacks the city of Osaka by emitting a destructive rainbow ray from his back, along with a freezing spray capable of incapacitating Gamera.

2,268 people shared this. Be the first of your friends.