Check out costumes from the movie Neon Genesis Evangelion: Death and Rebirth to get costume ideas for your next Halloween or costume party. 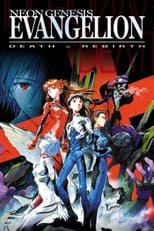 Originally a collection of clips from the Neon Genesis Evangelion TV series, Death was created as a precursor to the re-worked ending of the series. Rebirth was intended as that re-worked ending, but after production overruns Rebirth became only the first half of the first part of The End of Evangelion, with some minor differences.

2,273 people shared this. Be the first of your friends.

Ajin: Demi-Human - Compel | The Grinch | In This Corner of the World | Yu-Gi-Oh!: The Dark Side of Dimensions | Kizumonogatari Part 2: Nekketsu | Kizumonogatari Part 3: Reiketsu | The Anthem of the Heart | Garo: Divine Flame | Mushishi: The Next Chapter - Drops of Bells | The Empire of Corpses | Kizumonogatari Part 1: Tekketsu | The Last: Naruto the Movie | Beyond the Boundary: I'll Be Here – Past | Resident Evil: Vendetta | The Boy and the Beast | Pokémon the Movie: Volcanion and the Mechanical Marvel | One Piece Film: GOLD | Attack on Titan: The Roar of Awakening | Death Note | Kuroko's Basketball the Movie: Last Game