Check out costumes from the movie Death Note: The Last Name to get costume ideas for your next Halloween or costume party. 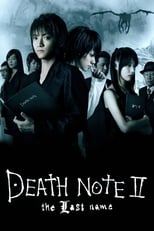 In the second installment of the Death Note film franchise, Light Yagami meets a second Kira and faithful follower Misa Amane and her Shinigami named Rem. Light attempts to defeat L along with Teru Mikami (a Kira follower) and Kiyomi Takada (another Kira follower) but in the end will Light win? or will a Shinigami named Ryuk make all the difference in Light's victory or his ultimate death?

2,206 people shared this. Be the first of your friends.