Check out costumes from the movie Stalingrad to get costume ideas for your next Halloween or costume party. 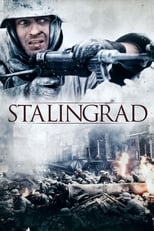 "Stalingrad" follows the progress of a German Platoon through the brutal fighting of the Battle of Stalingrad. After having half their number wiped out and after being placed under the command of a sadistic Captain, the Lieutenant of the platoon leads his men to desert. The men of the platoon attempt to escape from the city which is now surrounded by the Soviet Army.

2,157 people shared this. Be the first of your friends.

To Be or Not to Be | Judgment at Nuremberg | Enemy at the Gates | Saving Private Ryan | Mirror | The Dirty Dozen | U-571 | The Diary of Anne Frank | Captain America: The First Avenger | Atonement | Valkyrie | Gandhi | Life Is Beautiful | Pearl Harbor | Memoirs of a Geisha | The Others | The Great Dictator | The English Patient | The Pianist | Schindler's List