Check out costumes from the movie Scarface to get costume ideas for your next Halloween or costume party. 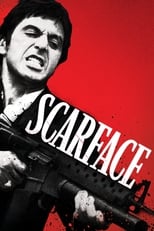 After getting a green card in exchange for assassinating a Cuban government official, Tony Montana stakes a claim on the drug trade in Miami. Viciously murdering anyone who stands in his way, Tony eventually becomes the biggest drug lord in the state, controlling nearly all the cocaine that comes through Miami. But increased pressure from the police, wars with Colombian drug cartels and his own drug-fueled paranoia serve to fuel the flames of his eventual downfall.

2,053 people shared this. Be the first of your friends.

All Cheerleaders Die | The Man from U.N.C.L.E. | A Walk Among the Tombstones | Are You Here | A Most Violent Year | The Boy Next Door | The Purge: Anarchy | Poltergeist | Ouija | Kite | My Girlfriend's Boyfriend | Don't Be Afraid of the Dark | Inside Job | Animal Kingdom | 13 | Endless Love | Big Hero 6 | Force of Execution | 3 Ninjas: High Noon at Mega Mountain | Conan the Barbarian