Check out costumes from the movie Where Eagles Dare to get costume ideas for your next Halloween or costume party. 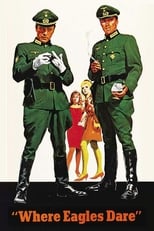 World War II is raging, and an American general has been captured and is being held hostage in the Schloss Adler, a Bavarian castle that's nearly impossible to breach. It's up to a group of skilled Allied soldiers to liberate the general before it's too late.

2,162 people shared this. Be the first of your friends.

G.I. Joe: Retaliation | Red Tails | 42 | Captain Phillips | A Princess for Christmas | Gangster Squad | She Devils of the SS | Seven Psychopaths | Frozen | Transformers: Dark of the Moon | Death Race 2 | The Girl with the Dragon Tattoo | Grave of the Fireflies | Into the White | The Master | Miranda | The Water Horse | The Tournament | The Tourist | Middle Men