Check out costumes from the movie Lawrence of Arabia to get costume ideas for your next Halloween or costume party. 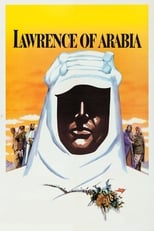 The story of British officer T.E. Lawrence's mission to aid the Arab tribes in their revolt against the Ottoman Empire during the First World War. Lawrence becomes a flamboyant, messianic figure in the cause of Arab unity but his psychological instability threatens to undermine his achievements.

2,043 people shared this. Be the first of your friends.