Check out costumes from the movie Buffalo Soldiers to get costume ideas for your next Halloween or costume party. 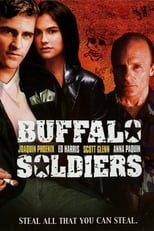 Set just before the fall of the Berlin Wall in 1989, Sgt. Ray Elwood is an American soldier stationed at a German army camp. A soldier because a judge gave him a choice between the army and jail, Ray spends much of his free time cooking cocaine for the MPs. When a soldier dies and a toxicology screen shows an alarming level of illegal narcotics, someone is sent in to investigate.

2,117 people shared this. Be the first of your friends.