Check out costumes from the movie Given to get costume ideas for your next Halloween or costume party. 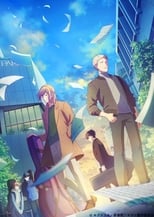 Following the airing of the final episode of the Given anime adaptation today in Japan, the official Twitter account announced that a feature film adaptation will be released in 2020 directly picking up where the TV series left off.

8,381 people shared this. Be the first of your friends.

I Killed My Mother | Prayers for Bobby | Pretty Boy | Shelter | Milk | Hurricane Bianca | Being 17 | Moonlight | Bohemian Rhapsody | Love, Simon | The Blonde One | The Imitation Game | Love, Be Loved, Leave, Be Left | Handsome Devil | Stranger by the Lake | Wild Reeds | You'll Never Be Alone | I Am Jonas | Latter Days | Those People