Check out costumes from the movie Fort Apache to get costume ideas for your next Halloween or costume party. 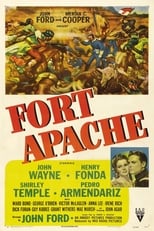 In John Ford's sombre exploration the mythology of American heroes, he slowly reveals the character of Owen Thursday, who sees his new posting to the desolate Fort Apache as a chance to claim the military honour which he believes is rightfully his. Arrogant, obsessed with military form and ultimately self-destructive, Thursday attempts to destroy the Apache chief Cochise after luring him across the border from Mexico, against the advice of his subordinates.

2,417 people shared this. Be the first of your friends.

The Missing | The Beguiled | Master and Commander: The Far Side of the World | The Sisters Brothers | The Adventures of Bullwhip Griffin | The Revenant | The Outlaw Josey Wales | Far from the Madding Crowd | Mystic River | The Perks of Being a Wallflower | A Simple Favor | The Professor and the Madman | Child 44 | The Kissing Booth | John Carter | 1922 | Interview with the Vampire | The Man Who Invented Christmas | Forrest Gump | A Christmas Carol