Check out costumes from the movie Godzilla, Mothra and King Ghidorah: Giant Monsters All-Out Attack to get costume ideas for your next Halloween or costume party. 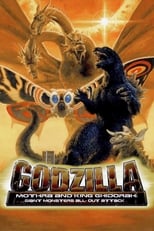 After nearly half a century of peace, Godzilla has become a distant memory for most of Japan. Decades later the destruction of a US nuclear submarine signifies the possible return of Godzilla. As this occurs, fictional documentarian Yuri Tachibana discovers the legend of the guardian monsters. The three ancient guardians must awaken to protect Japan against a vengeful Godzilla.

2,419 people shared this. Be the first of your friends.