Check out costumes from the movie Valkyrie to get costume ideas for your next Halloween or costume party. 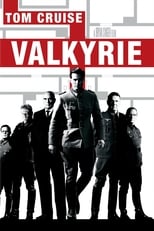 Wounded in Africa during World War II, Nazi Col. Claus von Stauffenberg returns to his native Germany and joins the Resistance in a daring plan to create a shadow government and assassinate Adolf Hitler. When events unfold so that he becomes a central player, he finds himself tasked with both leading the coup and personally killing the Führer.

2,052 people shared this. Be the first of your friends.