Berserk: The Golden Age Arc I - The Egg of the King Costumes

Check out costumes from the movie Berserk: The Golden Age Arc I - The Egg of the King to get costume ideas for your next Halloween or costume party. 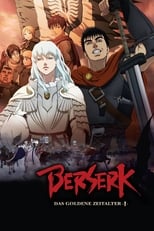 Guts, an immensely strong sword-for-hire, has little direction in his life, simply fighting one battle after the next. However, this all changes suddenly when he meets and is bested by Griffith, a beautiful and charismatic young man who leads the Band of the Hawk mercenary army. After Guts joins the Band and the relationship between the two men begins to blossom, Casca, the tough, lone swordswoman in the Band of the Hawk, struggles to accept Guts and the influence he has on the world around her. While the two men begin to fight together, Griffith continues to rise to power, all seemingly in order to reach his mysterious, prophesied goals. What lengths will Guts and Griffith go to in order to reach these goals, and where will fate take the two men?

3,185 people shared this. Be the first of your friends.

Berserk: The Golden Age Arc II - The Battle for Doldrey | Berserk: The Golden Age Arc III - The Advent | Demon Slayer: Kimetsu no Yaiba - The Movie: Mugen Train | Sword Art Online: The Movie - Ordinal Scale | Attack on Titan: Chronicle | Made in Abyss: Dawn of the Deep Soul | Noblesse: Awakening | Silent Hill | Given | Naruto Shippuden the Movie | Saint Seiya: The Heated Battle of the Gods | Saint Seiya: Legend of Crimson Youth | Love, Chunibyo & Other Delusions! Take On Me | Mushishi: The Next Chapter - Drops of Bells | I Am a Hero | Attack on Titan: Wings of Freedom | Lupin the Third vs. Detective Conan: The Movie | Attack on Titan: Crimson Bow and Arrow | One Piece Film: GOLD | The Seven Deadly Sins: Prisoners of the Sky